What does Yantra Mean? 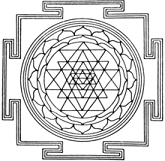 What does Yantra Mean?

Yantra (यन्त्र) is the Sanskrit word for "instrument" or "machine". Much like the word "instrument" itself, it can stand for symbols, processes, automata, machinery or anything that has structure and organization, depending on context.

One usage popular in the west is as symbols or geometric figures. Traditionally such symbols are used in Eastern mysticism to balance the mind or focus it on spiritual concepts. The act of wearing, depicting, enacting and/or concentrating on a yantra is held to have spiritual or astrological or magicalbenefits in the Tantric traditions of the Indian religions.

Stella Kramrisch defined a yantra as "a geometrical contrivance by which any aspect of the Supreme Principle may be bound to any spot for the purpose of worship. It is an artifice in which the ground is converted into the extent of the manifest universe." According to Heinrich Zimmer: “The yantra is so named because it brings about the vanquishment (niyantrana) of all evil that arises from desire, anger, and other errors. Hence one should draw an auspicious yantra along with the surrounding frame and develop it before one’s inner eye, once one has learned everything useful to know about it from the mouth of the teacher.”

Yantra is a Sanskrit word that is derived from the root yam meaning to control or subdue  or "to restrain, curb, check".Meanings for the noun derived from this root include:

"any instrument or machine" (i.e. that which is controlled or controls. For instance the body is said to be a yantra)

"any instrument for holding, restraining, or fastening" (for instance a symbol which 'holds' the essence of a concept, or helps the mind to 'fasten' on a particular idea)

"a mystical or astronomical diagram" (usually a symbol, often inscribed on an amulet) sometimes said to possess mystical or magical powers.

-tra is an indoeuropean suffix meaning ' instrument', found in Latin aratrum and in tantra and mantra. A yantra depicts both macrocosmic and microcosmic forces acting together - the movement towards and away from the centre - "control" and "liberation" within the one device. Mantra plus yantra creates tantra. In some disciplines of Tantra it is said that a focused, controlled gaze upon a particular yantra may lead to liberation.

Symbols, Signs and Shapes regarding this Word:

Shapes and patterns commonly employed in yantra include squares, triangles, circles and floral patterns but may also include more complex and detailed symbols, for instance:

The lotus flower typically represent chakras, with each petal representing a psychic propensity (or vritti) associated with that chakra

A dot, or bindu, represents the starting point of creation or the infinite, unexpressed cosmos

The shatkona (şaţkoņa) (Sanskrit name for a Hexagram) composed of a balance between:

An upwards triangle which according to Tantra denotes energy, or more specifically action and service (seva). It may also denote spiritual aspiration, the element of fire, or Shiva. It is also said to represent the static substratum of the cosmos.

A downwards triangle which according to Tantra denotes spiritual knowledge. It may also denote the creative power of the cosmos, fecundity, the element of water, or Shakti

Circle = Energy of the element water

Square = Energy of the element earth

Point = Energy of the element ether